Quite often in the discussion about male circumcision, we bring up the similitude between FGM (female genital mutilation) and male circumcision. One reason I do it is because there are often women who think that men should be circumcised because "uncut is gross" -which is a really offensive and sexist statement, not unlike those people who think that only circumcised women are marriage-worthy-, and because a lot of American women nowadays don't know about FGM, or if they know about it and they consider it horrendous, they most likely don't know that it was practiced in the U.S. by White Christians just 60 years ago.


Female circumcision evokes images of Africa, pre-teen girls forcefully restrained crying while a midwife with a rusty shaving blade or a piece of glass cuts their bodies, and yes, this is a sad and cruel reality, but it's just the tip of the iceberg. 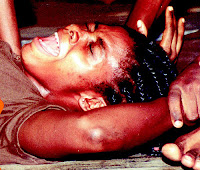 Yesterday an intactivist blog would send me to a person's blog, a woman in Malasya documenting the circumcision of her baby daughter. The circumcision took place in a hospital back in 2010, and the pictures were far more peaceful that those of a male circumcision in the U.S. The mother and grandmother, the nurses talking to the innocent baby. The mom describes:

"I think ada about 3 or 4 nurses inside that time and everybody is talking to Zahra as a way to calm her and eventually she is very jolly and happy that time. Babytalk gaagagagauuuagagauagaa all the time haha."

"It happens so fast, with a bismillah and a snip, a little bit blood and that's it, Zahra dah sunat! She didn't cry even a drop, in fact giggling2 lagi. I guess it wasn't painful for her, alhamdulillahh."

There were tons of comments from intactivists rudely criticizing the woman. I understand, FGM is far more demonized in the West than male circumcision, but this woman's entry was no different from all the American moms who post about their son's circumcision. There was definitively a cultural clash, which is why I won't provide the link to her blog - although I am reposting her pictures.

The mother didn't respond to most of the aggressive comments. However she did respond to some direct questions, stating that it was "compulsory according to Mazhab Shafie" and that "it is an honor for a woman". She also said that "In Malaysia we only cut the outer skin of the clitoris, not the whole clit like in Africa. It wont change the physical or the ability of the clit.". She also said:

"1) It brings no harm (according to some people it can affect ur sexual drive but I don't think so as our practice is not cutting it totally, just more like a scrap of it)"
"2) We believe that there is a blessing in every act that God asked us to do. "
"In my religion's view (Islam), circumcision for boys to make sure the penis is always clean, whilst for girls is said an honor. It is normal practice to our culture and religion."

Seeing this "hygienically" and "medically correctly performed" circumcision made me sad because it looks so much like a male circumcision in the west. Because those innocent eyes will some day find about her mutilation, and she might resent it, or she might go on to continue the cutting cycle like her mom and her grandmother just did to her.

It makes me sad because of the innocence in this baby's eyes. The baby is now 2 years old and has a brother - who will no doubt be circumcised later. The mother doesn't seem to think there's anything wrong about circumcising her children (boy and girl), like many American mothers don't see anything wrong with circumcising their boys.

It makes me sad, just like it made me sad once to find that my friend had his 2 sons circumcised.

The AAP itself, when talking about FGM back in the 80s acknowledged that "Some forms of FGC are less extensive than the newborn male circumcision commonly performed in the West. In addition, “mutilation” is an inflammatory term that tends to foreclose communication and that fails to respect the experience of the many women who have had their genitals altered and who do not perceive themselves as “mutilated.”" (http://pediatrics.aappublications.org/content/125/5/1088.full) Evidently, this girls mom and grandmother don't perceive themselves as mutilated, and the circumcision itself seems to be less severe than male circumcision. You can barely see the little piece of clitoris on the scissors blade or the piece of cotton.

Does that make it any less wrong? No.

Source of this image http://www.drmomma.org/2011/04/male-and-female-circumcision.html

Note that male circumcision as currently practiced in the US is considered MGC type II. Whether this girl's circumcision was partial clitoris removal (FGC Type I (b)) or scraping (Type IV), I don't know.

According to the Encyclopedia Britannica (http://www.britannica.com/EBchecked/topic/121897/female-genital-cutting-FGC), a report from 2000 indicates that in Africa the procedure was thought to be performed on approximately 3 million girls each year. According to http://intactbydefault.blogspot.com/2010/08/what-is-really-going-on-with-us-newborn.html, in 2009 there were 2,834,849 circumcisions of neonates in the U.S.

According to the NY Times, http://www.nytimes.com/2010/05/07/health/policy/07cuts.html, in 2010 the AAP released a statement embracing the "ritual nick", "suggesting that American doctors be given permission to perform a ceremonial pinprick or “nick” on girls from these cultures if it would keep their families from sending them overseas for the full circumcision."

“It might be more effective if federal and state laws enabled pediatricians to reach out to families by offering a ritual nick as a possible compromise to avoid greater harm,” the group said.

"But some opponents of female genital mutilation, or F.G.M., denounced the statement."

“I am sure the academy had only good intentions, but what their recommendation has done is only create confusion about whether F.G.M. is acceptable in any form, and it is the wrong step forward on how best to protect young women and girls,” said Representative Joseph Crowley, Democrat of New York, who recently introduced a bill to toughen federal law by making it a crime to take a girl overseas to be circumcised. “F.G.M. serves no medical purpose, and it is rightfully banned in the U.S.”

As stated, "right now, federal law in the United States prevents "any nonmedical procedure performed on the genitals" of females."

One question would be why such federal law does not prevent a non-medical procedure performed on the genitals of males? Which is what circumcision is. Instead, luminaries like Mike Gatto came up with the "urgent" California bill AB 768 which "precludes "a city, county, or city and county ordinance, regulation, or administrative action from prohibiting or restricting the practice of male circumcision, or the exercise of a parent’s authority to have a child circumcised." Further, AB768 provides "that the Legislature finds and declares that the laws affecting male circumcision must have uniform application throughout the state." (http://www.fighthatred.com/fighting-hate/people/885-assemblyman-mike-gatto-fights-for-the-right-to-circumcise-male-children-in-california)

The "urgency" is explained as follows:

"This act is an urgency statute necessary for the immediate preservation of the public peace, health, or safety within the meaning of Article IV of the Constitution and shall go into immediate effect. The facts
constituting the necessity are:"
"In order to clarify the state’s authority with respect to the regulation of the practice of male circumcision at the earliest possible time, it is necessary for this act to take effect immediately."

A congressman, Brad Sherman, is also trying to pass a federal act for the "defense of religious and parental rights". Just the name already tells us that this has nothing to do with health. It's a non-medical procedure performed in the name of the religion of the parents or the cultural conditioning of the parents, and nobody has the guts to stand to it and say no.

And now the AAP might be coming with a revision of their policy on male circumcision. So 2 years ago they asked for permission to perform the "ritual nick" on girls. What can we expect from them now?

Male Circumcision in the USA: A Human Rights Primer

FGM/MGM: Similar Attitudes & Misconceptions
Stepping Away from Friendship in the Name of Human Rights
Male and Female Circumcision