Circumcision News - Because reality is sometimes worse than fiction.

Reality is sometimes worse than fiction. (this blog entry used to be about the "foreskin man" comic that has been perceived by many as anti-Semite, and how the episodes relate  to recent news. I'm removing the references to the comic but I'm leaving the news).

The American Academy of Pediatrics found the health benefits of newborn male circumcision outweigh the risks, but the benefits are not great enough to recommend universal newborn circumcision. 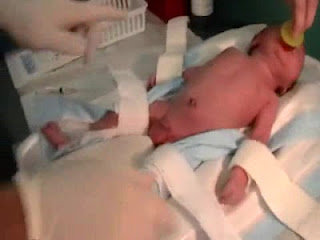 The Circumcision of Benjamin, screen captures from a youtube video 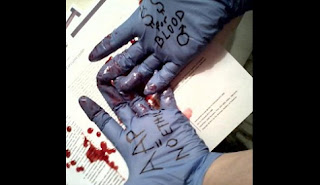 Jeremy (ERIC): The new statement is extremely disappointing and, as expected, neglects the medical ethics of cutting a healthy body part off a non-consenting individual and the human rights aspects of bodily integrity. The AAP Task force on circumcision started with a pro-circumcision bias and cherry picked which studies to use in forming their policy, and their claims fly in the face of many other studies, real world statistics, and medical positions around the world. I hope new parents can see through the smoke screen and realize that there are ulterior motives at work here.

The changes the AAP have made to the circumcision policy, while they do not recommend circumcision, they push benefits over and over again and mention the money incentive.

I believe the AAP made these changes because circumcision rates in the US have plummeted between 2006 and 2012 and the revenue earned by its members are dropping too. Note that the ACOG endorses this policy; this is no surprise as OB-GYNs are the ones performing most circumcisions in the United States, so a drop in rates hits their revenue too.
Circumcision Sucking Gave 11 NYC Boys Herpes In The Last Decade: CDC. NYC, June 7, 2012. According to the CDC, between 2000 and 2011 a total of 11 baby Jewish boys in New York City were infected with herpes after having their bits snipped in an out-of-hospital Orthodox circumcision performed by a mohel. Ten of the 11 boys were hospitalized afterwards and two of them died. 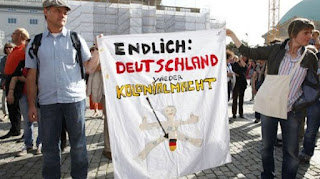 Around 500 mainly Jewish but some Christian and Muslim protesters gathered in Berlin on Sunday to demand the right to circumcision after a disputed court ruling in Germany outlawing the rite.

N.Y. Rabbis Will Defy Law On Ancient Circumcision Ritual Even After the Death of 2 Babies.
SEP 04, 2012

Even after the deaths of two children and the injuries of many more, a group of ultra-Orthodox rabbis say that if a proposed law requiring parental consent for an ancient circumcision ritual is enacted they will defy it. In the ancient "metzitzah b'peh" ritual, a "mohel" or a Jewish person, usually a doctor or rabbi, trained in the practice circumcision removes the foreskin and draws blood from the circumcised penis with his mouth. 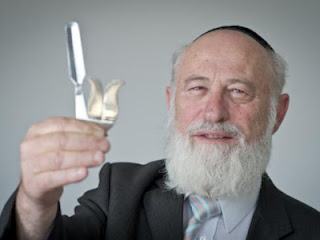 In August, Rabbi David Goldberg of Bavaria became the first mohel to see a complaint filed against himself for "unlawful bodily harm" by a non-Jewish physician from Hessen. Goldberg, who has performed over 4,000 circumcisions across Central Europe, calls the charge an "insult" and believes it is "a clear act of anti-Semitism." 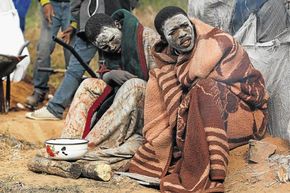 Already the 2012 winter season has surpassed the death toll during the same period last year when 26 initiates had died. Since Tuesday, the number has increased by 14 from 20 to 34. 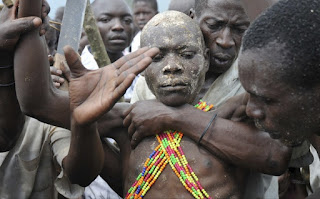 Is there anything more terrifying (to a guy, at least) than a pack of determined males trying to cut off part of your penis? In the Ugandan town of Mbale, where a non-coercive circumcision campaign aimed at reducing HIV transmission has metastatized into forced circumcisions, that nightmare scenario is a reality.

Today, international affairs magazine The Africa Report describes the scene of a naked man fleeing 50 men attempting to forcibly circumcise him. "Only identified as Deo, the man sought sanctuary ... as the men and a local scalpel-wielding surgeon gave chase," reports Godfrey Olukya. In the last two days, more than 40 men have been subjected to forced circumcision in the town due to a disturbing mix of cultural and science-based values. 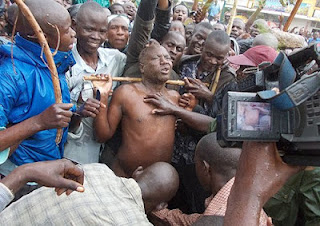 The ministry of health [of Zimbabwe] is deceiving people by announcing to them that once they are circumcised, they become immune to HIV/AIDS effectively encouraging them to engage in promiscuity. Instead of reducing the risk, circumcision has been tested through behavior change to actually be a protagonist of HIV transmission, critics state.
...
“Police in Mbale have fired teargas and deployed heavily to disperse hooligans forcefully circumcising people on the streets including non-Bamasaba.... It is estimated that a total number of about 220 people have been circumcised from the time the exercise began date. 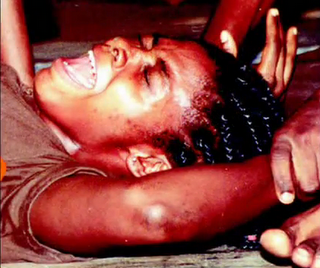 In Sierra Leone, the women say and sing in their native language:” today the ripe mango will be plucked” this means it’s time to remove the clitoris. They are initiated into the women hood, they believe this makes the women to be unpromiscuous and reduces sexual urge. 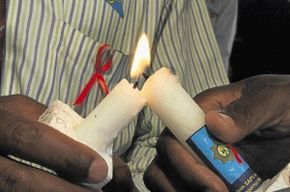 Forty-four members of Zimbabwe's parliament were circumcised on Friday as part of a national HIV/Aids awareness campaign.

Foreskin fibroblasts are used to grow and cultivate new cells that are then used for a variety of purposes. From the fibroblasts new skin for burn victims can be grown, skin to cover diabetic ulcers, and controversially it is also used to make cosmetic creams and collagens. One foreskin can be used for decades to grow $100,000 worth of fibroblasts.
Debate is growing over the ethics of using human foreskins for cosmetic purposes. One such cosmetic company, SkinMedica is raising a stir over their use of the growth hormone left over from growing artificial skin from foreskin fibroblasts. Dr. Fitzpatrick, who invented SkinMedica, works with a supplier that uses foreskin fibroblast to make injectable collagen. The foreskins that he receives the growth hormone for are used especially for cosmetics rather than for growing new skin for medical patients. 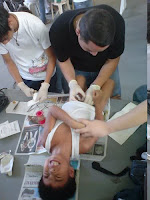 Operation Tuli -
Philippines. December 1, 2010
The Philippines has a long, strange, and confusing history with pagtutuli (circumcision). For years it has been a traditional custom performed at the age of 12 as a rite of manhood to coarsely chop off the foreskin and send the boy jumping into the ocean. In more recent years it has been medicalized and even commercialized with clinics selling circumcisions for adolescent boys during the summer months (so that they have adequate time to recover before school starts). 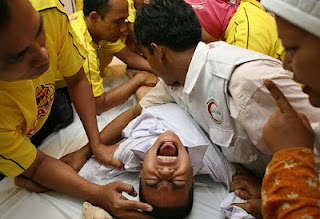 Indonesia.
July 2007
A young Indonesian boy screams as medical workers circumcise him in Jakarta, 01 July 2007. Some 50 Muslim received the procedure from a local charity group. The Islam religion stresses cleanliness, and circumcision in many nations is considered a form of natural hygiene, with the event being often viewed communally as a joyous occasion and celebrated. 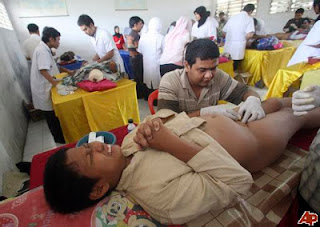 Indonesia June 6, 2010
A boy grimaces as paramedics performs a circumcision on him during a charge-free mass circumcision in Medan Belawan, North Sumatra, Indonesia, Sunday, June 6, 2010. In accordance with Islamic tradition Indonesian Muslim boys are circumcised before they reach puberty. Indonesia is the world's most populous Muslim country. 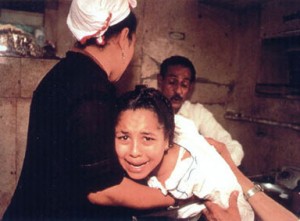 Australia sees rise in female genital mutilation14 September 2012
“The pretext that is often used is that it’s a religious custom, and it wouldn’t be the first time that religion has been used to mutilate or damage women,” [New South Wales state Minister for Family and Community Services Pru Goward] told ABC radio.

[Note: 20% of the Muslims also practice Female Genital Mutilation, often less invasive than Male Circumcision -as expressed by the American Academy of Pediatrics in 2010- but often a lot worse, including clitoridectomy and infibulation -cutting the clitoris and sewing the labia together leaving just a small opening for urine and menses-, i.e. Malaysia, Singapore, Indonesia. A young Malaysian Muslim mother stated that being circumcised is an "honor" in her religion and that she doesn't believe that it has any effect on her sexuality.]

Although female circumcision is often associated with Islam, Dr Riaz said that the practice predates Islam in many countries and that neither the Quran, the primary source for Islamic law, or the Hadith (collections of the sayings and practices of the Prophet) include a direct call for the practice.

Islamic clerics are divided, with some actively supporting the practice and others opposing it.

Female circumcision is most prevalent in central Africa and is also practiced to some extent in Brunei, Malaysia and Indonesia, according to Amnesty International. It is extremely rare in most of the Arab world, with the exception of Sudan and Egypt, with the Egyptian Grand Mufti going as far as to say female genital cutting was forbidden by Islam.

The World Health organisation and Amnesty International have condemned any form of female circumcision, claiming it has no health benefits, and have campaigned against extreme forms of circumcision in Africa.

However, practices vary from country to country.In Bruneian custom, female circumcision is performed on baby girls between 40 to 60 days, where small amount of skin tissue is removed from the genitalia.

Dr Riaz said that while female circumcision has taken on an Islamic dimension, it is actually practiced by some Christian, Jewish and animist sects as well.

Muslim Baby Hospitalized After Botched Circumcision. Israel, June 1st 2012. The infant’s Muslim parents brought their child to Rambam Medical Center in Haifa after the ritual circumciser accidentally dismembered the child’s penis. Urologists and surgeons worked to reattach the detached organ and said they expect the procedure to be successful.

Father of child who lapsed into coma after circumcision procedure demands probe. Saudi Arabia, August 02, 2012. After investigations, doctors found that the child had a severe lung infection caused by the anesthesia. He was hooked to a mechanical ventilator and given antibiotics. The next day, the ICU doctor called the father and told him that Muhammad’s condition had deteriorated further and he suffered from a collapsed lung. Doctors operated on the child to stabilize his condition.

MGMBill.ORG - A bill to end Male Genital Mutilation in the U.S. "We call on the members of the Congress to pass the MGM Bill into law without delay so that boys may enjoy the same protection from circumcision as girls."
Posted by dreamer at 5:31 AM