Prisioners of war should not be subjected to mutilation, cruel treatment and torture 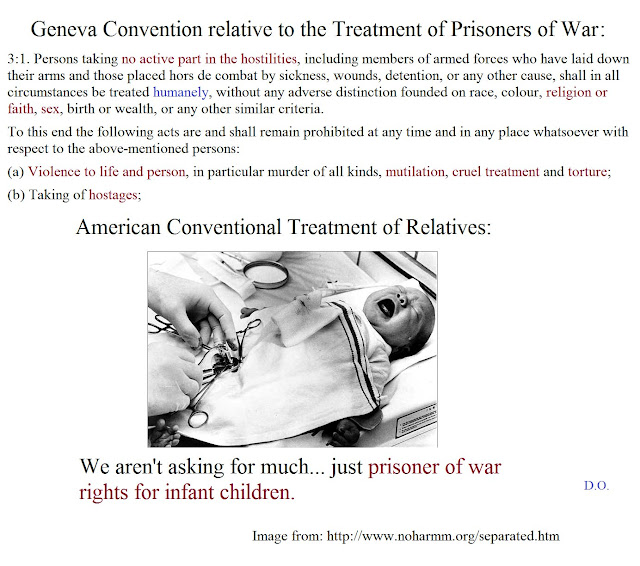 “The fact is,” says Goldman, “when it comes to sex, circumcised men don’t know what they’re missing.”
But a few do. Increasingly, men who were circumcised as adults (for various medical reasons) are speaking out against circumcision, providing firsthand accounts of sex before and after.

Douglas MacArthur, a 55-year-old locksmith from Pennsylvania who was also circumcised as an adult, reports similar problems. “Sex before circumcision was like driving a luxury car with automatic transmission,” he explains. “I used to just glide along. Sex now is like driving a tiny, powerless compact with a manual transmission. It takes a lot of work to get anywhere. My penis has lost 90 percent of its sensitivity.

...
Some medical professionals believe that circumcision for other than religious purposes would disappear from America if it weren’t covered by insurance. This is what happened in England, where the circumcision rate prior to World War II was roughly equivalent to that in the United States. After the war, British doctors could find no compelling evidence to continue the surgery, and it was dropped from the list of covered services. Within a decade, the circumcision rate dropped from 50 percent among the working class and 85 percent among the upper class to less than half a percent in both.

“Why is this procedure still covered by HMOs and health-insurance companies? The simple answer is, because parents want it,” says Patricia Wald, M.D., regional coordinating chief of pediatrics for Kaiser Permanente Medical Center in southern California. There, doctors counsel parents so they’re making an informed decision, and don’t perform the operation unless asked. “We cover it as a courtesy. But to me it’s cosmetic surgery, like ear piercing.”
.....


“I didn’t know what circumcision really was when I consented to have my three sons circumcised,” says Marilyn Milos, founder and executive director of the National Organization of Circumcision Information Resource Centers (NOCIRC). “My doctor told me it was necessary, that it didn’t hurt, and that it took only a moment to perform-like cutting the umbilical cord, I thought.”

Ten years after her last son was born, Milos went back to school to become a registered nurse. As a student, she was asked to assist at a circumcision. “To see a part of a baby’s penis being cut off – without an anesthetic – was devastating.” Later, while working as a nurse, she made a videotape of the procedure and called it Informed Consent.

“Parents had no idea what was happening to their baby boys,” she explains. “The point was to show them what circumcision really entailed.” The hospital, Marin General in California, refused to allow expectant parents to view the tape. “They said it was too much for parents to see. I said, ‘Then perhaps it’s too much for babies to experience.’”