Mommy wars - a call for a kind message


My response to Joseph4GI at Mommy Page Wars

I agree that these mommy wars have a strong component of control, power and personal validation. But I also thing that this phenomenon occurs on both sides, as these virtual battles seem to degenerate sometimes into name calling and an unfortunate attempt to submit the other to surrender. 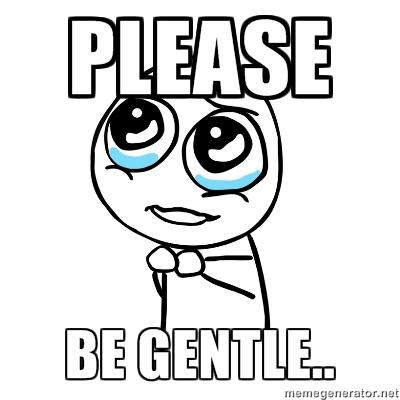 While I have seen the intactivist message start kindly most of the times, this kindness ends up yielding to personal attacks, attempts at guilt tripping and other techniques that make us look bad. Thus, what we call "pro-cutting" mommies expect to find bullying, fear-mongering, hysteric intactivists. Can we look at the mirror and recognize that in ourselves?

Those on the other side, they don't know it. And some times they have a vested interest in not knowing.

For one, there are many circumcised men who are not aware of any negative effect. Of course, in lack of a major complication, the only way to understand the effects would be by a thorough comparison of their sexual experience with an uncircumcised male, at a level that we normally don't share with others. So of course these males are "circumcised and fine", and they are likely to not want to know the difference. Who would want to know the difference when there's almost nothing that they can do about it? When it means receiving a major blow to their confidence?

There are many parents who had their sons circumcised and didn't have to deal with major complications. Sure, they had to deal with a fuzzy baby afterwards and with the aftercare, but they don't realize that said aftercare and fuzziness is more complicated that what they believe to be a nightmare: caring for an intact penis, washing underneath that "bacteria trap", having to keep it "superclean" and to verify that their growing children continue to do so. It's a wonder that our manufacturers have not invented some rotary wire brush to polish the inside of intact foreskins given what a nightmare everyone seems to think this is.

And everyone knows "that guy" who didn't have it done and had to do it later due to the recurrent infections, and everyone has heard those old wives tales, the same tales that the AAP keeps perpetuating through their horribly written and researched Policy Statement, which is the first thing that most people find when they do their research by typing "benefits of circumcision" on a search engine, just to find that "the benefits outweigh the risk", the same article parroted in all mainstream media on August 27th of last year.

Add the social and family pressure, "you gotta do it", the health professionals pressure (especially nurses from what I hear), the weight of a "tradition" and you have the landscape that first time naive and nervous parents have to face when they face this "decision".

And suddenly they find themselves stormed by this strange gang of people trying to instill them fear and to submit them into surrender... see? Before they have the time to look at the first link that an intactivist posted, there are already 100+ messages of intactivists that won't stop at anything until these new parents have a sudden epiphany and announce loudly that they have changed their minds. But most of the times this doesn't happen.

Denial is the first step. "If it was wrong why would doctors recommend it", nevermind that the AAP really doesn't recommend it, they seem like they do. "But it's done for hygiene because otherwise you have to pull it back all the time to wash it" that's what they hear all the time, EVEN from health professionals who unlike what one would expect, don't really know better. And of course they haven't seen anyone with a major complication (or they are not aware of it), so everything that we tell them seems to be just fear mongering.

And then they become defensive. It just makes sense: the harder you are attacked, the harder you defend yourself, in every aspect of life, isn't it so?

And of course there are many intactivists in this battle that have deep regret or who have been personally impacted by their own circumcisions and carry a lot of anger, and this becomes apparent after an exchange of words. And there's also the tagging of more intactivists to the battle, so you have 20 or more intactivists trying to convince one or two people with a non-stop repeating of messages.

I really wonder if people would be more likely to listen if we just gave our message, respectfully, free of emotions, and left. If they asked questions, we would be there to answer them, but if they don't ask anything then we just give them the space to process, to research some more, to see the links that we offered.

There was this recent case this last week of a mom about to circumcise her baby and stressed, almost crying about it. Most everybody was nice expressing their disagreement, with the possible exception of that one person who said that her son would resent being mutilated like he resented being mutilated by his parents.

Yes, that may well be the case. But is that the way to address a person who you don't know, a person who is trying to do the best they can, and a person who is going to come back home, to deal with what they have done with their lives, and find that this action that they were nervous about has elicited such negative message? Is it any wonder that the next status that we see from this person said that if "anyone thought that circumcising her baby made her a bad mom they could kiss her ass".

Did we achieve anything other than looking bad?

We've been accused of fear mongering. Have you seen an intactivist tell a mom: "I hope your son survives" or "your son may die"? I've seen it.

We've been accused of guilt-tripping. Have you seen anyone say "your son will resent you" - I've seen it. 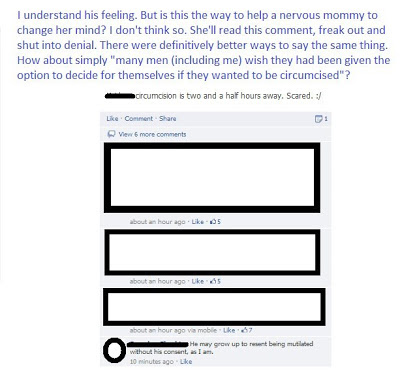 We've been accused of using threatening language. Have you seen anyone say "how would you like to be strapped to a board and have your labia cut off"? - I've seen it. 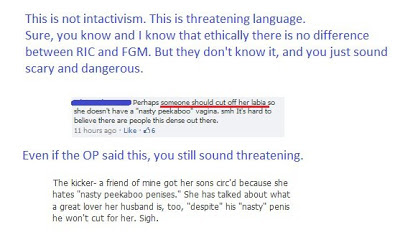 Are those things false? No. But is that the way to deliver our message? Or are we just becoming too loud, expecting immediate submission, and getting angered when we don't see that happening? 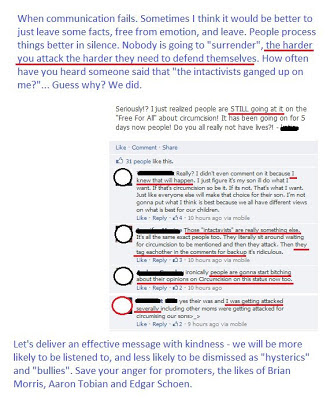 Can't we just stop for a second and see what we look like for someone outside?

One thing is for sure, we've lost people from our ranks because they don't want to be seen in that same light.

Are we becoming a self-fulfilling prophecy of "bashing" and "harassment"? We need to look deep into ourselves and see if we can fine tune our message. And maybe save our anger for those who really deserve it, those who are promoting the benefit of routine unneeded surgery of non-consenting babies.