I have heard good and bad (actually horrid) things about getting him circumcised. I am worried that I will make the wrong choice and regret it later on down the road.. I know that this is ultimately up to me and my boyfriend, but to the moms and dads out there that DID circumcise, how did you decide it was right, and how hard was it to see IT happen to your son??

One mommy said that:

My son was circumcised at birth. My husband and I made this choice because we felt it was the best thing for him. We didn't want him to feel different from the rest of his male family members. I'm reading a lot of comments that are talking about the foreskin being cut off, but that was not the case with my son. There was NO cutting whatsoever involved in his circumcision. He never cried because his diaper was hurting him or acted like there was any pain when we cleaned it. For those men out there that are unhappy with a decision their parents made for them as a minor there are steps to have it replaced. Also, the main thing that is on my mind is why would anyone allow circumcision to happen in a hospital of all places if it wasn't safe? Don't you thing CPS would put a stop to this if it was so cruel. Why let potential "uniformed" parents make this decision? My final note to this now probable traumatized women is talk to you doctor, don't just look up answers of the internet. I'm not trying to say that you shouldn't look for answers online, but have your findings verified by your doctor. I wish you the best of luck in finding what is best for you and your family!

She mentions some interesting points.She said that in her son's case, there was no cutting at all involved. From that, I assume that they used the Plastibell method, which is often marketed as a no-cutting method. But, not only that is a lie (there IS cutting involved, and also there is necrotizing of tissue so that it ends up falling), but the main problem is not whether an scalpel or scissors or a string was used, but the fact that healthy normal tissue was removed. 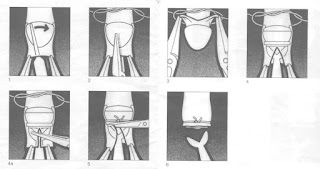 This blog entry addresses exactly that myth, that there is no cutting involved in Plastibell, and shows a comparative table of risks between the common methods from a World Health Organization publication.http://circumcisiondiaries.blogspot.com/2013/02/they-really-dont-cut-them-nowadays.htmlHer second point is that "there are steps to have it replaced" - yes it's called foreskin restoration. However foreskin restoration cannot replace the nerve endings from the original foreskin, meaning that the neurological (or sensory) damage cannot be repaired. The new foreskin is mechanically functional (although it takes years to re-create it, I completed my first year this week), and it's sensitive as the rest of the penis, but not as the original foreskin was. It's kind of like a reconstructed nipple after a mastectomy: it's skin, but not delightfully sensitive skin - nor functional for breastfeeding.She also says that "why would anyone allow circumcision to happen in a hospital of all places if it wasn't safe?" - That's a good question. In fact, female circumcision of babies in the U.S. was performed up to the 70s in hospitals. It was probably safer than male circumcision is. Why did they do it back then? Why don't they do it now?Female circumcision is still done in hospitals in places like Indonesia and Malaysia, where the society opposes any attempt at banning it. Do you think that they don't have evidence that it is damaging? Are they "barbaric"?http://www.theedgemalaysia.com/index.php?option=com_content&task=view&id=227188&Itemid=77Circumcision is tolerated here because it's the status quo. It's been done for 150 years. It's a snowball rolling down the hill. It's a cultural, unnecessary practice, to which the American public has devoted a special mystique. As Edward Wellerstein (American Jewish) wrote in 1980: "The "enigma" lies in the United States medical profession's apparent inability to come to grips with the simple fact that there are no demonstrable health benefits of circumcision, and there are risks." http://www.cirp.org/library/general/wallerstein/


To this her reply was

AGAIN, I will say I'm just stating MY OPINION. People like you are the main reason I don't like to comment on fan pages. It's like a very religious person trying to CRAM THEIR BELIEFS DOWN MY THROAT BECAUSE I DON'T THINK THE SAME WAY. My husband and I made this choice and you throwing every thing you can think of at me to make me look like a bad person or make me feel guilty is not going to work. I'm just trying to answer a question, like you, but if I continue to be villainized I will delete my comments and this women who is looking for what people have to say will only have the extremist to go on.


Was it confrontational to respond to her points? When you make a medical decision that can affect a person's life, shouldn't you have facts to sustain your decision? And even more, when you are giving a recommendation to someone, is it enough to have an opinion? What if your opinion is wrong and a person ends up getting hurt? I don't think I ever judged her, I discussed the points that she stated, but she felt too vulnerable to discuss those points.

Meanwhile, men like me continue wearing devices that pull the skin of our penises towards our knees for several hours every day, almost every day of the week for several years, to re-gain something from what we lost when a doctor raised a scalpel to our private parts. How is this a matter of someone's opinion?
Posted by dreamer at 8:36 AM