A response to Nancy Ripton's "When to circumcise" in Canadian Family

Nancy Ripton learned that there is a different protocol for newborn circumcision and late circumcision during childhood. One reason Dr. Martin gave her is that "babies tend to bleed less and fuss less during a circumcision".

A problem with newborn circumcisions is the risk of bleeding, because babies have less blood. In fact, this happen to Ryleigh McWillis from the British Columbia in 2002. The parents were told to look for bleeding but they didn't know how much bleeding was too much, and this caused the dead of their dear baby.

Less blood may also mean higher risk for cardiac arrest. A baby died in Israel in May of this year after a Jewish bris. The baby appeared to stop breathing shortly after the procedure, but the media refuses to acknowledge the role of the circumcision, citing instead a possible unknown pre-existing condition.

The use of anesthetic may be debated, but the pain of circumcision is not subject of debate. Listen to the cries, observe the face of a baby, and you won't have any doubt.

You say delaying brings up the question of whether the child should be circumcised at all, and Michael says he is circumcised and he wants his son to be as well. The actual question is why should a baby be circumcised in absence of any disease, condition or abnormality?

Is there a logic to subjecting a baby to amputation of healthy normal tissue that does not represent a threat to the baby's well being?

The $200-$2000 cost of circumcision can be incredibly increased if your son happens to be the unlucky one to develop a complication requiring corrective surgery. Penile denudation, buried penis, penile adhesions, skin bridges, lacerations and partial amputation of the glans (specially with the method favored by Dr. Pollock and his disciples, the Mogen clamp). Or the possibility of too much skin removed, resulting in painful erections and sex as an adult.

Phimosis is not an indication for infant circumcision. Most babies are born with physiological phimosis, it's a natural condition for that age, because the foreskin and the glans have not separated completely. Separation takes years, and retraction often becomes possible in the 10-17 years range. Operating for phimosis before adulthood is like giving a baby a denture because he is toothless.

Urinary backflow is not cured by circumcision. Those babies often need surgical correction of the ACTUAL problem.

Penile cancer hardly qualifies as prevention, given the low incidence of the disease. The AAP estimates that 909 to 322,000 circumcisions are needed to prevent a single event, and that comes at the cost of 2 to 909 complications, some of which can be severe and life long. It's in the AAP's Technical Report on Circumcision, the one people don't bother to read before repeating the marketing propaganda.

Circumcision as HIV prevention doesn't measure as well, as has been found out by Zimbabwe and Nyanza in recent days. Safe sex, abstinence, monogamy and low promiscuity are important measures. Circumcision is a distraction.

A group of international physicians, including Canadians, has published an article criticizing the AAP's Policy Statement as culturally biased and scientifically unsound.

What is the price of self-determination and bodily integrity? How many studies are needed to override the empowerment to decide over one's own body? Self-ownership?

Forced infant circumcision (prepucectomy) is an unethical, unnecessary and risky residual of the Victorian era, justified with overinflated health benefits and overlooked risks and harm.

The foreskin has sexual functions. It's removal permanently alters the sexual experience, by damaging the frenulum, removing the ridged band, limiting the skin mobility and subjecting the glans to gradual keratinization. But those interested in promoting the procedure won't discuss the anatomy and functions of the foreskin, or the harms that I just mentioned.

One thing I will give Nancy. The graphic chosen to represent circumcision is quite fitting. English speaking countries practice of circumcision: cutting the edge of the sexual experience of your children for over 150 years. 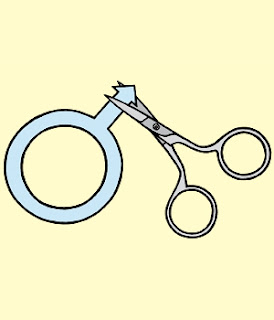