Alfred Schram - The online legacy of an intactivist

His daughter's announcement of his passing:

My heart is both heavy and light as I write that my beloved father, Alfred Schram passed away today of an apparent heart attack. We had returned from a recent trip to Belgium where he had an opportunity to see all his living cousins and he died in one of his favorite spots - where he and my mother courted almost 60 years ago. His last 2 weeks were some of the happiest since my mother died but this is a day I never thought would come. Cheers, Alfred, BonPapa, Daddy, Freddy. We love you and the house is emptier without you already. - Gwynne Schram Gillette


On foreskin restoration, a 2012 comment on The Whole Network

I had the same problem, with the shaft completely bend to the left. When we were married (in 1957), our wedding night would have been a disaster, had my wife not been patient and understanding. After discussing the situation with her, I consulted a urologist about surgical foreskin restoration. But at that time, cosmetic surgery was in its infancy, and the results of surgical foreskin restoration were unaesthetic at best and beyond our financial means. I only found out about non-surgical restoration six year ago. Even though by that time my wife's Alzheimer's prevented her from comprehending what I had initiated, her earlier support in seeking surgical restoration kept me committed. She passed away two years ago, and did not have a chance to experience what she had expected. Still, I feel that I owe to her memory the commitment to a full restoration.

I understand your husband frustration: it took me several months of manual tugging on the short side before being able to put t-tapes around the shaft, and several more months to grow enough skin for a TLC. 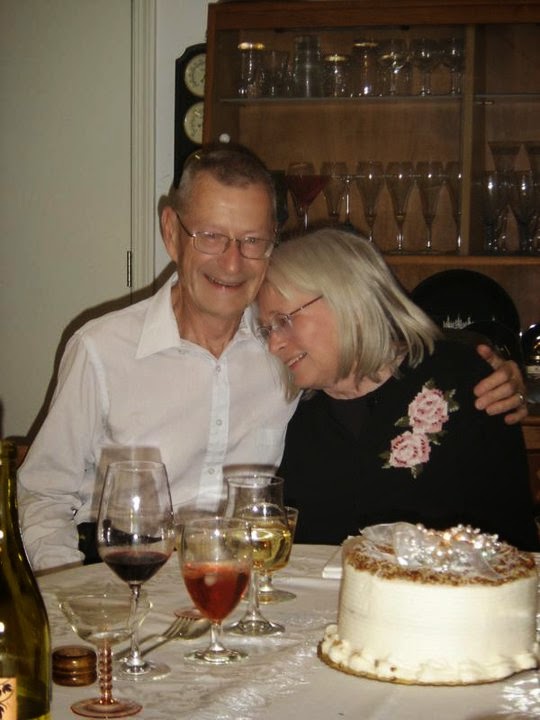 Dear friends. I would like to share my memory of this particular photo. It was in November 2007, our 50th anniversary, when my wife was already severely affected by Alzheimer's. Our daughter had baked a cake, and when she brought it to the table, my wife asked if it was her birthday. Our daughter answer that it was our 50th anniversary. My wife replied that she was not married. Then our daughter simply said: You are married to this man. My wife looked puzzled at me, then smiled and put her head on my shoulder, just as our daughter took the picture. I am sure you understand how much I cherish this picture.

On his circumcision, communication between Alfred and me. I share this because he was open about his story and people should know how and why these things happen:

Alfred: I just found out that you were circumcised at 4-6. I was also circumcised at 4-5 (in Belgium,way back in 1935). I was given chloroform for the anesthetic, which made me throw up when I awoke.

Me: Why was your circumcision done?

Alfred: I am not completely sure. My grandmother took me to an old doctor who told me to stop playing by myself, or he would have to cut it off. I did not know what he meant because in French, playing "by" yourself or "with" yourself is expressed in the same way. But I know that at the time, doctors were curing masturbation and the mental illnesses which it is supposed to cause, with circumcision. And I know that my grandmother was terrified of having mental illness in her family, since it would have made it impossible to find a suitable spouse for any of her grandchildren. When I threw up after the surgery, the nun called me a dirty sinner (Catholicism is the state religion in Belgium, and at the time, the hospitals were in the charge of the church).


On US supporting circumcision programs in Africa

Thank you for showing the true results expected after forcing circumcision on millions of African men. It is unbelievable that scientists could so obviously ignore human rights and the damage that forced circumcision causes. What could be their agenda? - comment on https://www.youtube.com/watch?v=RUETRjnvsac

Thank you for taking the side of the boys who do not have the choice. It is hard to believe that the AAP, which should be concerned with children's health and rights, completely ignores the wish of the baby to grow up with a whole body. - Comment on https://www.youtube.com/watch?v=Hp2HOpl3Gsg

Instead of Viagra, many men resort to non-surgical foreskin restoration. At the present time, these restoring men probably amount to 250,000, only a small percentage of circumcised men, because foreskin restoration is not in the news. Is it not time for the media to publicize this practically costless alternative?  -  Comment on https://www.youtube.com/watch?v=SQb_wSDLVPk

His family, on his passing:

It is sudden and it is a shock to many. He was on a day trip to Austin and he was in his favorite park when he collapsed of what seems to be natural causes. A couple tried resuscitating him as they waited for paramedics to arrive but in the end he wasn't able to be revived. But he was at one of his favorite parks where he used to take Eleanor in their youth and he just got back from a ten day trip visiting his family in Belgium. So there are many things to be happy for him for.