Emeritus professor Brian Morris, molecular biologist, has recently been very active on facebook with his usual fight against intactivist and repetitive promotion of circumcision.

I was curious to see his  friend list due some recent comments, and it was interesting to see the innuendo on several of his friends. While this doesn't necessarily reflect on Morris, it is important to see the kind of behavior that becomes enabled and encouraged by his pseudoscience.

Let's see some of those friends. 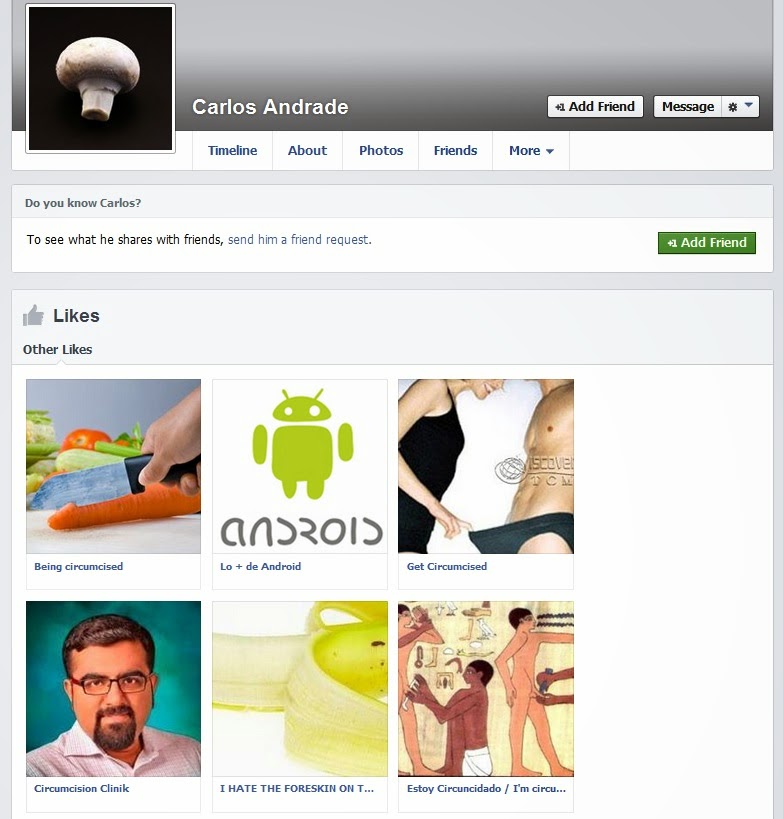 Carlos Andrade: his likes include circumcision fetish and circumcision advocacy. Carlos Andrade is known for an online article, re-published in several sites, "circuncision: la diferencia oculta"  (the hidden difference) which promotes circumcision and echoes many of Morris' claims. He claims: "Lo que hay que aclarar es que no hay una disminución del placer, sino un CAMBIO en cómo se siente, y un cambio que, la gran mayoría de los que se operan de adultos, percibe como positivo" (there is no pleasure reduction, but a CHANGE in the way it feels, a change that most of those who are operated as adults perceive as positive). Could it be that most of those adults were operated because they actually needed it due to some pathology Mr. Carlos?

The mushroom is an allusion to the mushroom head of the circumcised penis. 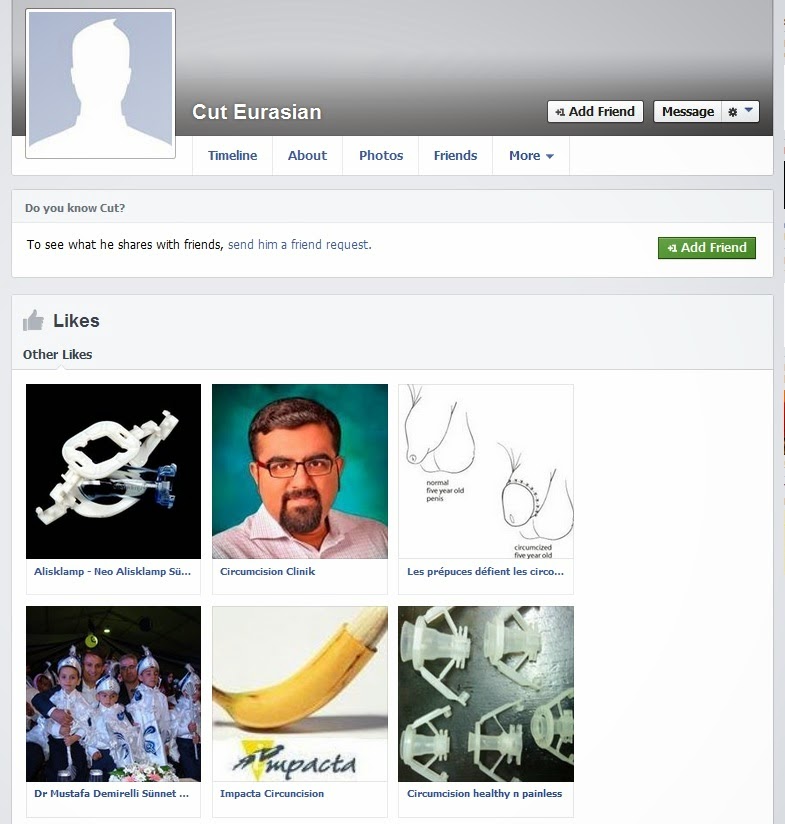 Cut Eurasian (obviously not a real name, but an allusion to his circumcision status "cut"). 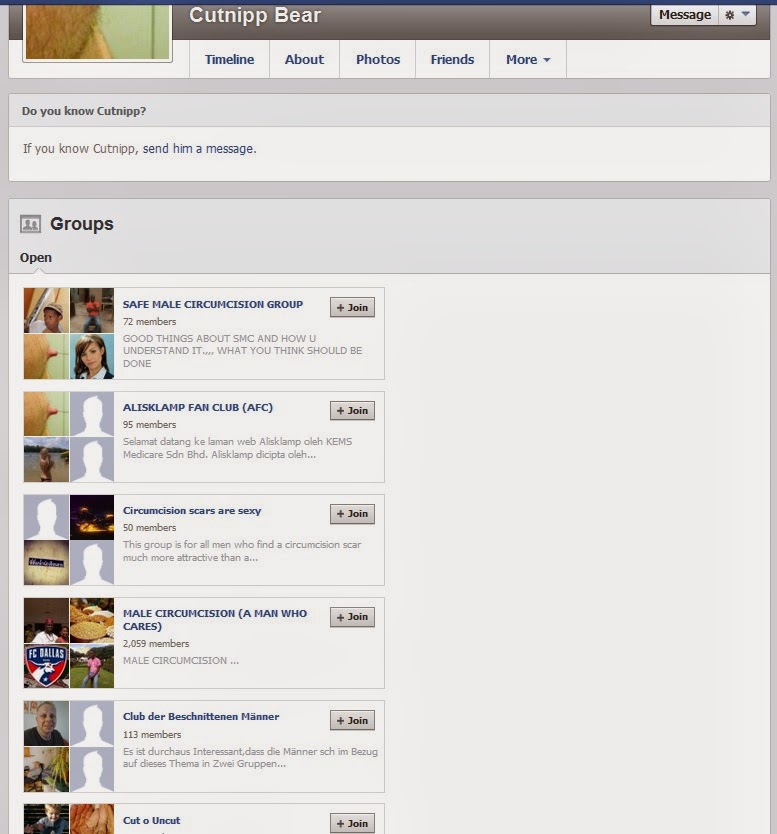 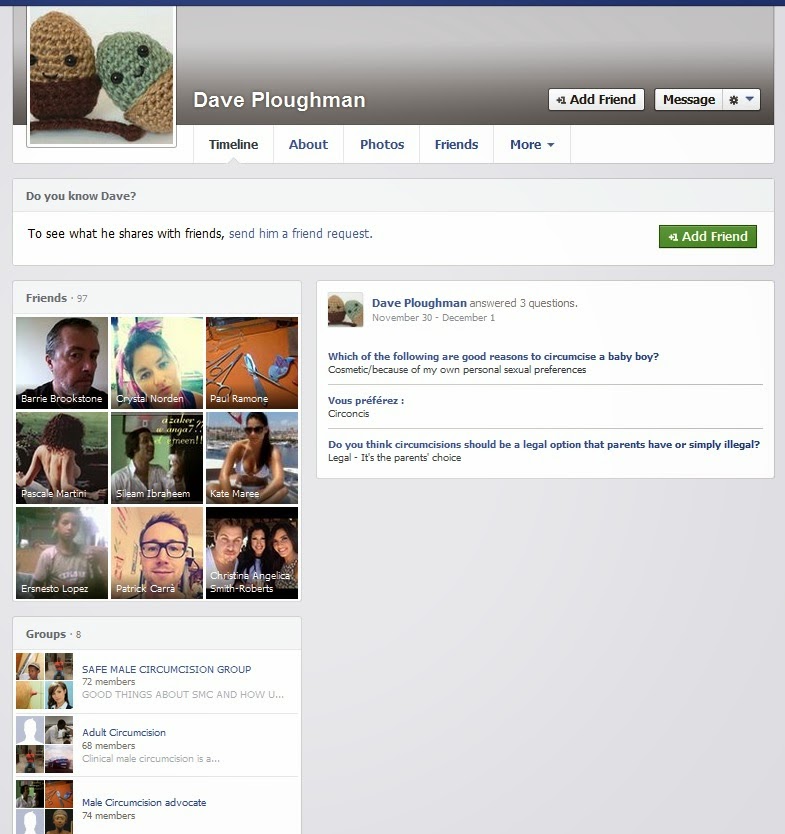 Dave Ploughman. His profile picture represents two acorns, which allude the exposed (circumcised) glans. He responded a question saying that "Cosmetic/because of my own personal sexual preferences" is a good reason to circumcise a baby, anything wrong with that? 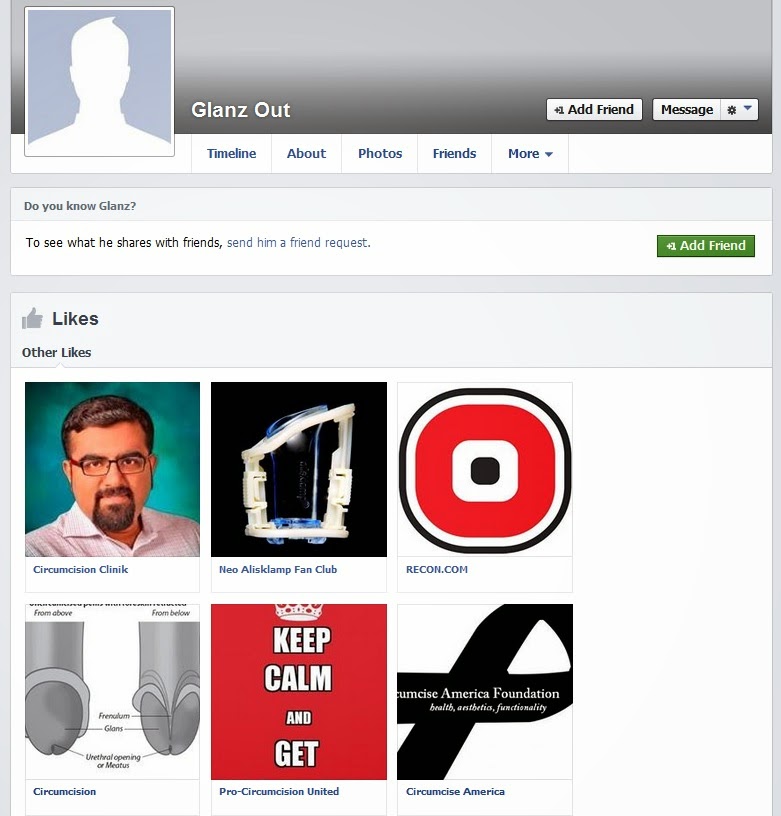 Glanz Out - obviously an allusion to the exposed glans. Member of pro circumcision groups and pages. 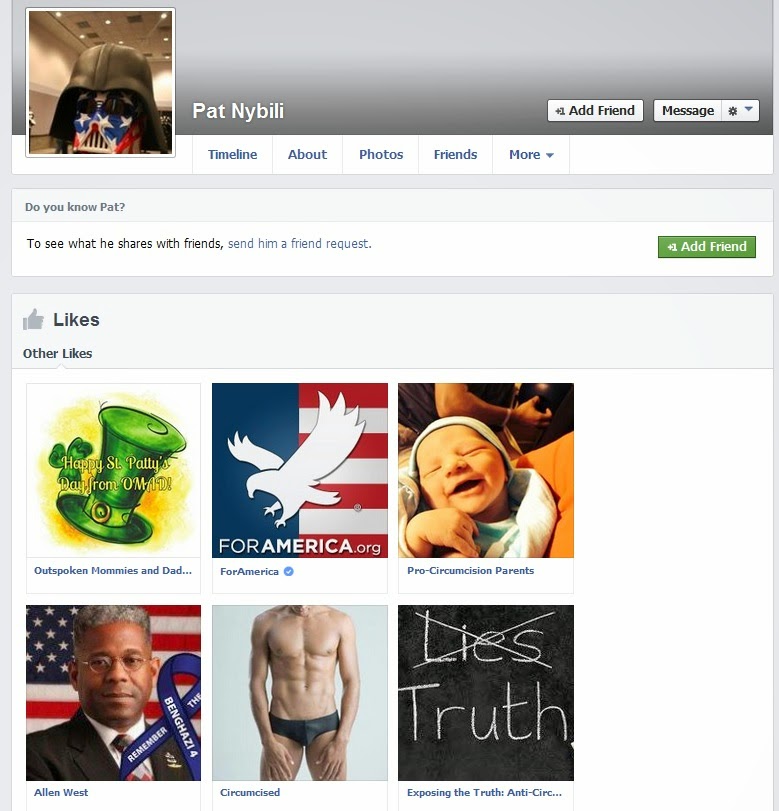 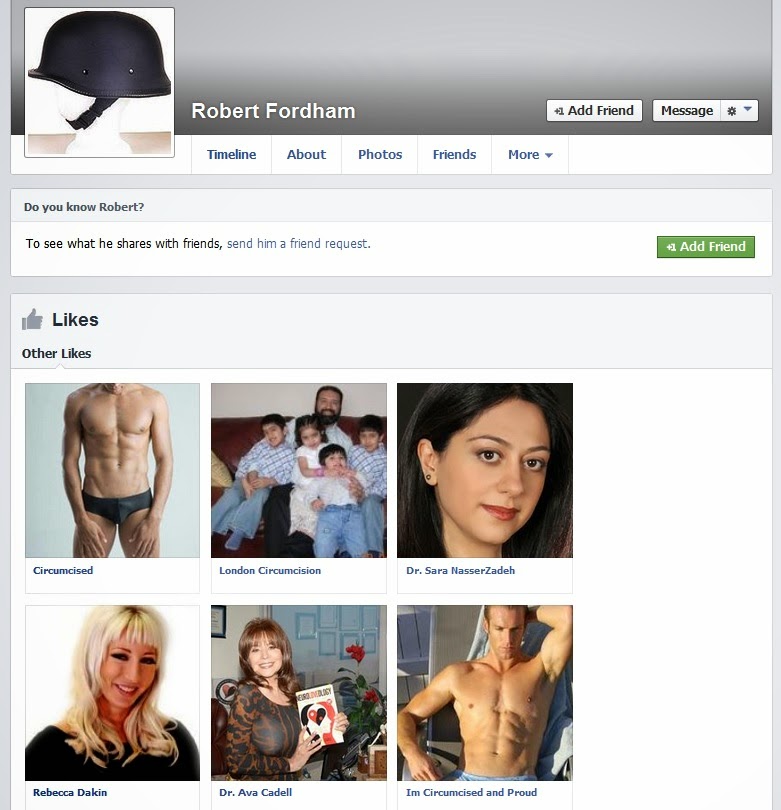 Robert Fordham. The helmet is also an allusion to circumcision status. 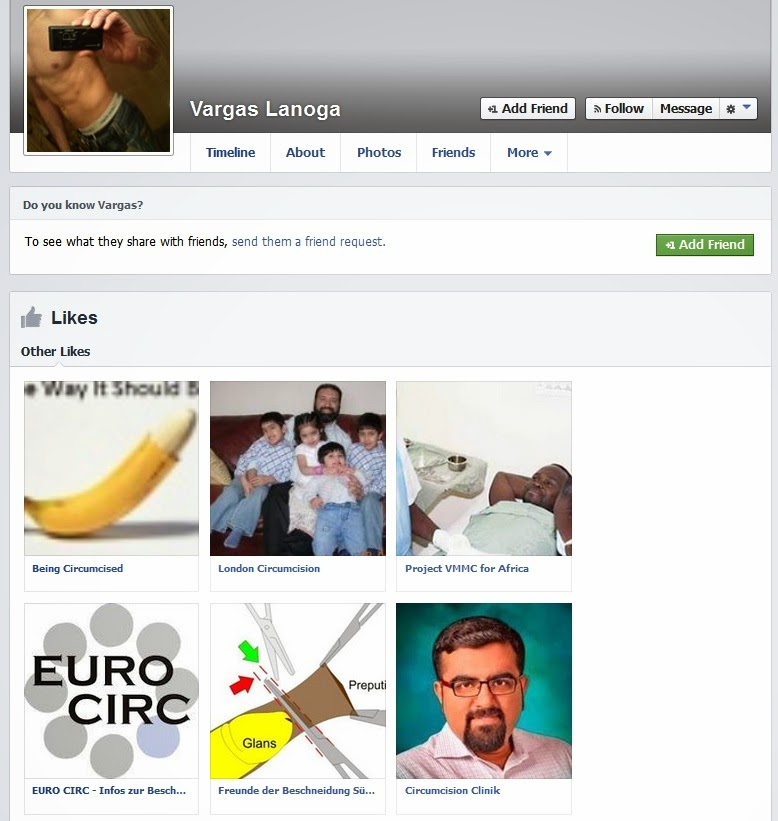 Vargas Lanoga (from his profile):

Do you have an ant eater or a helmet head
u dont need it u dont want it 4 skins make the girls want to vomit · Helmet head
Which of the following are good reasons to circumcise a baby boy?
Cosmetic/because of my own personal sexual preferences 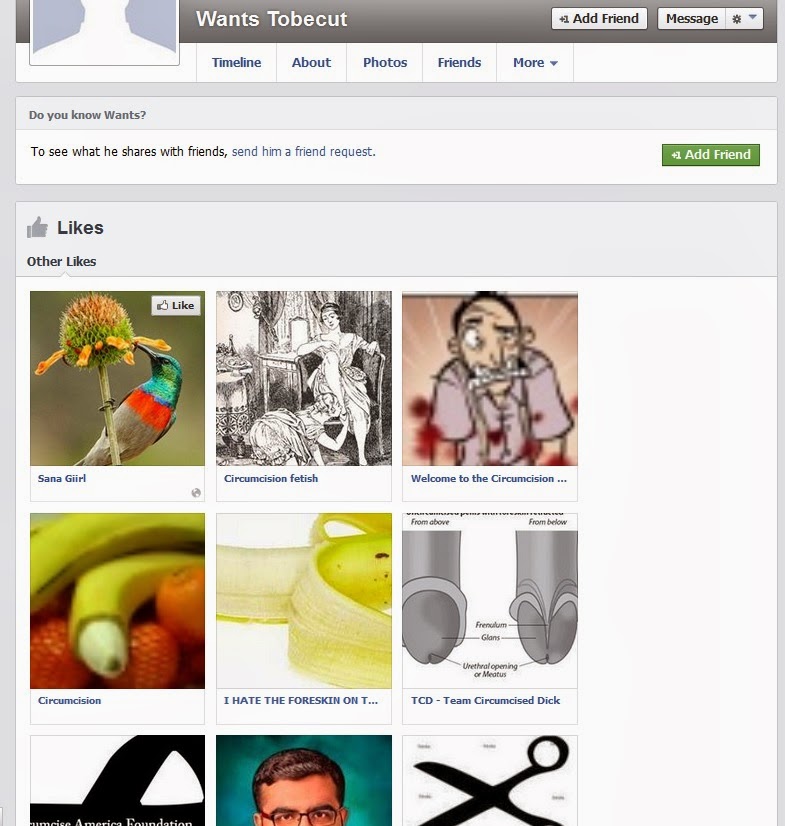 Wants Tobecut (wants to be cut - wants to be circumcised). Again, the list of pages and groups speaks for itself.

So, are these individuals interested in circumcision from a health/public policy point of view? Or is it a psychological mark, a mystique, a fetish? Are they so marked by their circumcision status that they need to express it through their profile picture and their fake names?

And when they come to Morris as online friends, is their behavior encouraged and enabled by the emeritus professor who loves circumcision so much? Is he aware of what he attracts, or does he play into it?

Is it really about "evidence based medicine", or what is this strange mystique into medical ritual?


Can you spot the fallacies and self referencing in the following comment by Brian Morris (from his second profile): 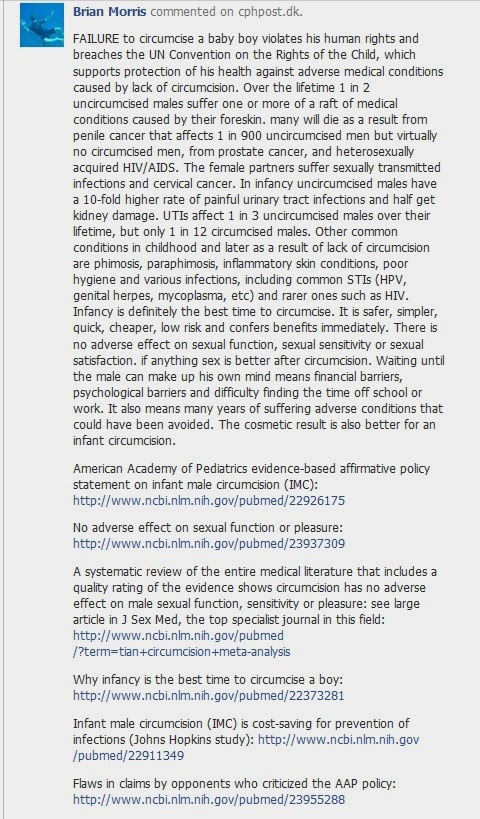 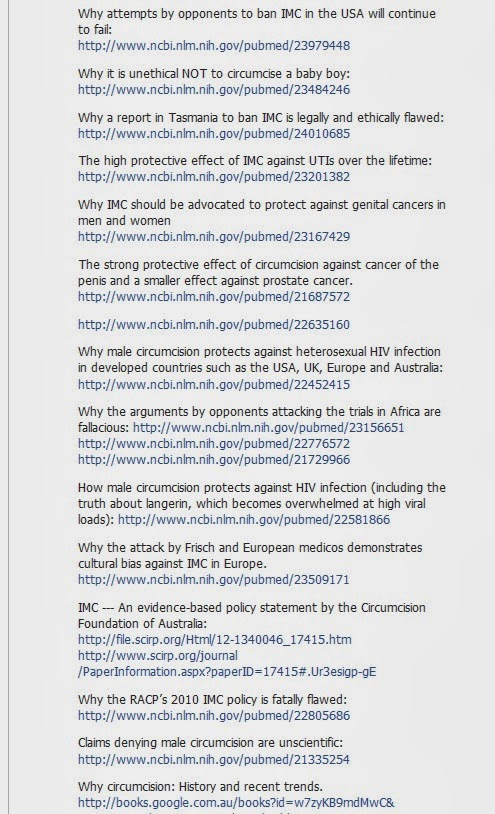 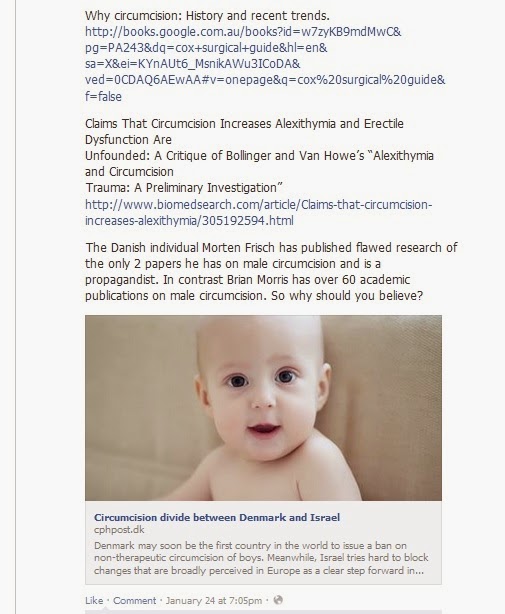