Through foreskin restoration I have learned many things about the penis that I did not know, and which I presume many uncircumcised males are not even aware of, since they take their experience for granted. 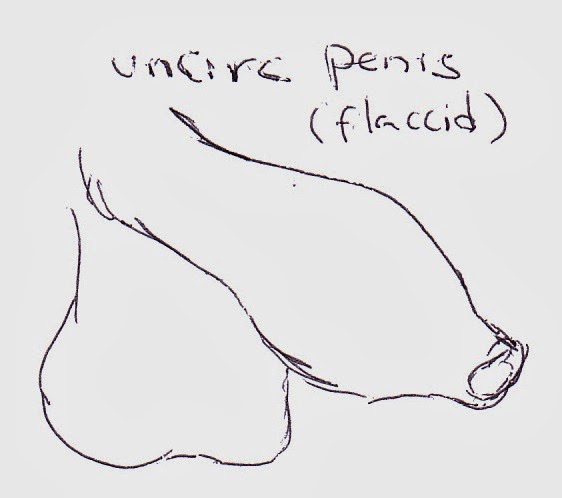 There are particularly sensitive areas on the foreskin: the inside, which is a mucosa, the "apparent" tip, the mucocutaneal transitional area (ridged band, per the research of John Taylor), which are loaded with Meissners corpuscles, and the frenulum, which attaches the bottom of the glans to the ridged band.. 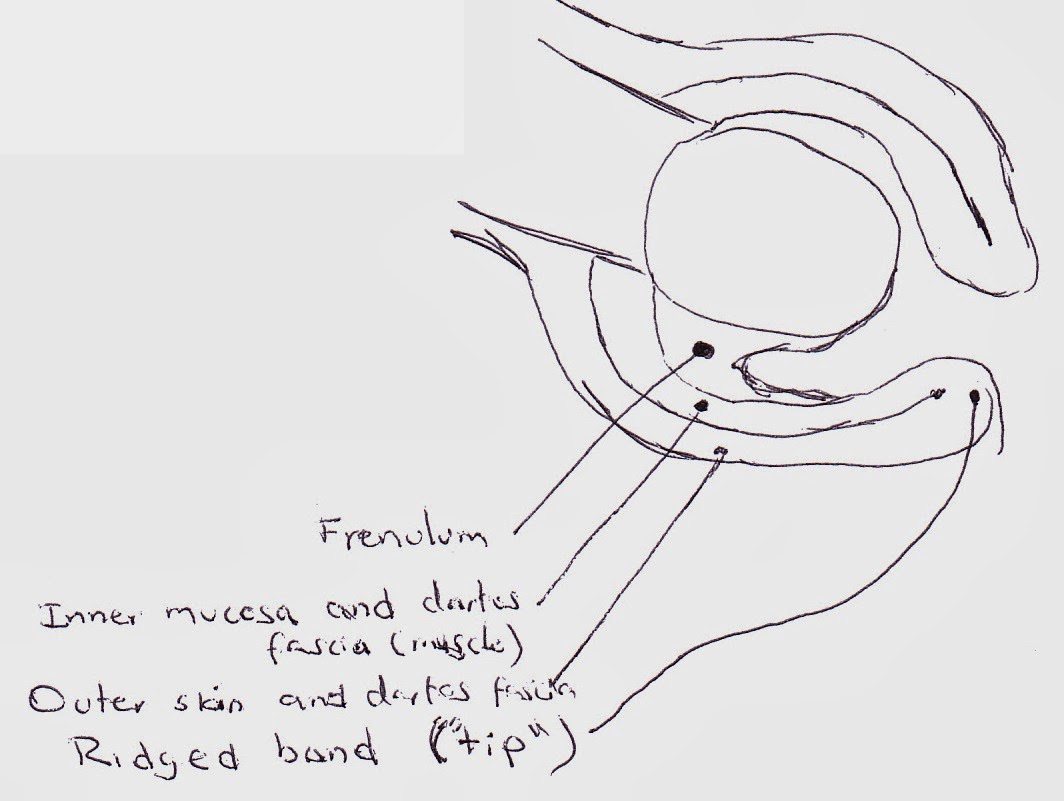 The frenulum looks like a seam that fixes the outer skin to the bottom of the glans. Most circumcised males are either missing the frenulum, or the frenulum has been detached from the glans and stitched later, turning it into scar tissue. It takes particular effort on the part of a doctor performing a circumcision to not harm the frenulum, and creates an extra challenge because the frenulum will be too long in comparison to the tissue removed. When I realized how damaged my frenulum was in comparison to a non-altered frenulum, I felt angry and sad at the same time. Before that moment I was under the impression that my frenulum was unharmed, given how pleasurable it is. 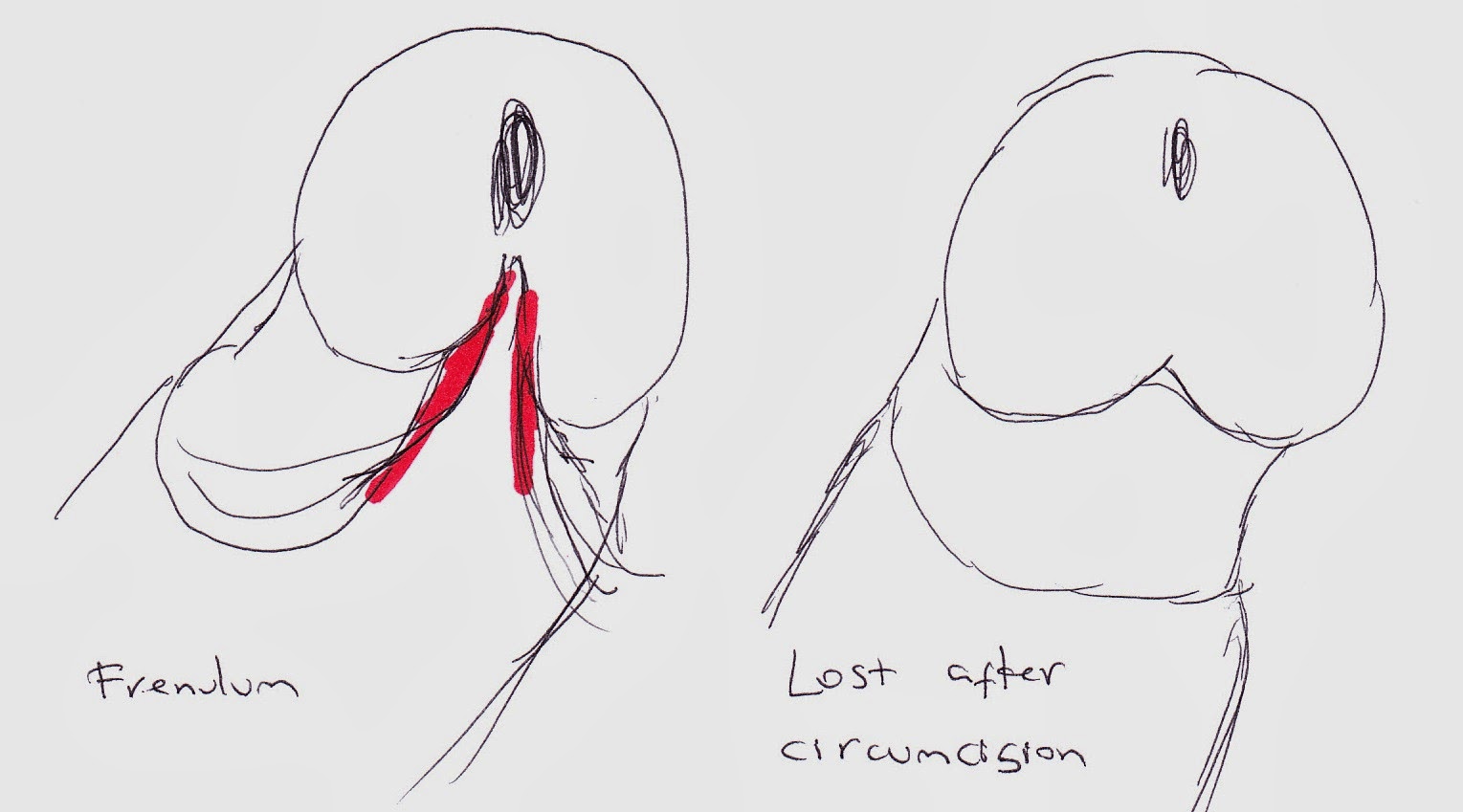 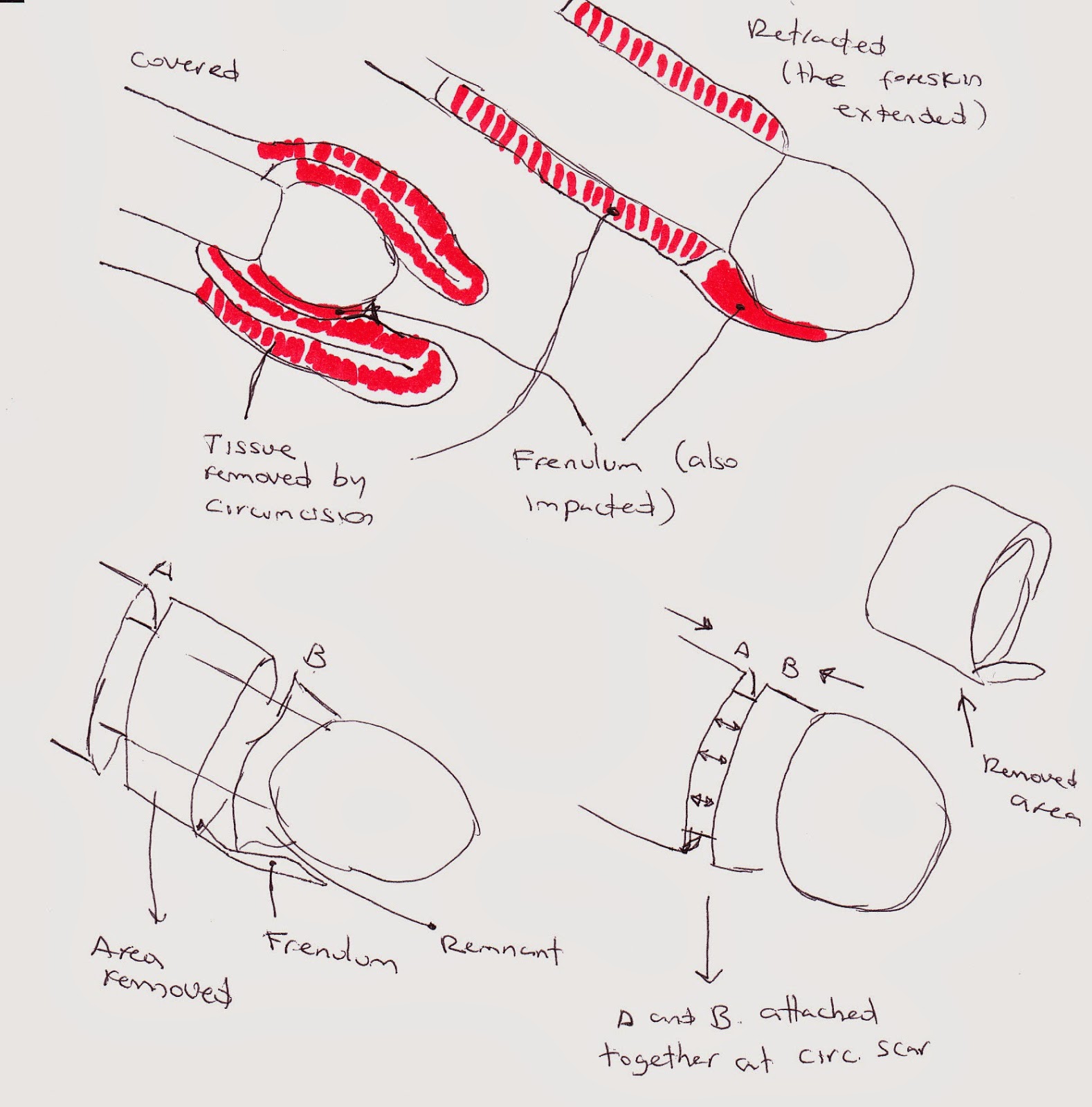 In clamp circumcisions (most of the neonatal procedures), the clamp takes care of sealing those areas of tissue. The tissue on the outside of the clamp loses circulation and is cut off. The two portions of tissue on the inside area of the clamp become sealed to each other, forming the scar. In non-neonatal circumcisions, after cutting the circular portion of tissue, the skin of the shaft becomes loose from the glans, and the glans retains some inner mucosa. Those two sections of tissue are then stitched (with self-dissolving stitches nowadays), forming the scar. These non-neonatal circumcisions tend to leave more ragged and asymmetrical scars.

The tissue removed by circumcision is likely sufficient to cover most or all the flaccid shaft. The typical restoration requires growing 3 to 4 linear inches of skin or more, in order to cover the glans two times (inner and outer layer) and retain a small overhang.

While a restored foreskin is not the same as the original, missing some of its special structures (ridged band, frenulum) and its balance of inner mucosa/outer skin, the experience of this restored foreskin is as close as we can get to the ideal situation in which we were never circumcised.

It is often possible to tell if the glans is covered, partially covered or uncovered, by the sensations coming from the penis - or by consciously putting attention to those sensations. In other words, it is possible to use the sensations from the foreskin or the glans, to know in what position they are.

The length of the flaccid penis is not necessarily constant. Since the penis is not anchored directly on the surface of the skin, nor anchored to the underlying bone, but the corpora (inner bodies of the penis) are held by ligaments, it is possible for the corpora to be pulled inside or pushed outside changing the apparent length of the penis temporarily. This is common when we start restoring pulling skin over the glans without having enough skin - the penis moves inside and it looks almost like it's gone - but there is no way for it to go inside and get lost, since the glans itself is anchored to the end of the skin of the shaft. 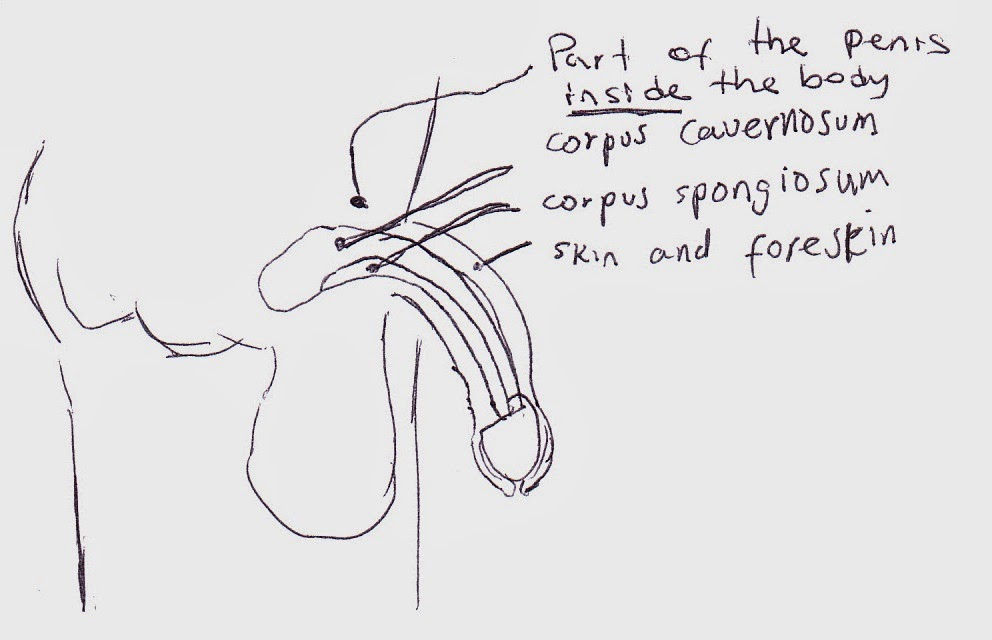 The penis is not a "single unit", in other words the skin is not attached to the inner body (the corpora) of the penis. All the skin of the penis is loose to facilitate movement. So you can imagine the penis as an arm inside a sleeve, attached only at the wrist. The arm can move forward or back, or the sleeve can be pulled up or down separately. For circumcised males, this process takes time as the skin, due to the lack of mobility, seems to attach, but within a few weeks from starting restoration this movement starts being possible. 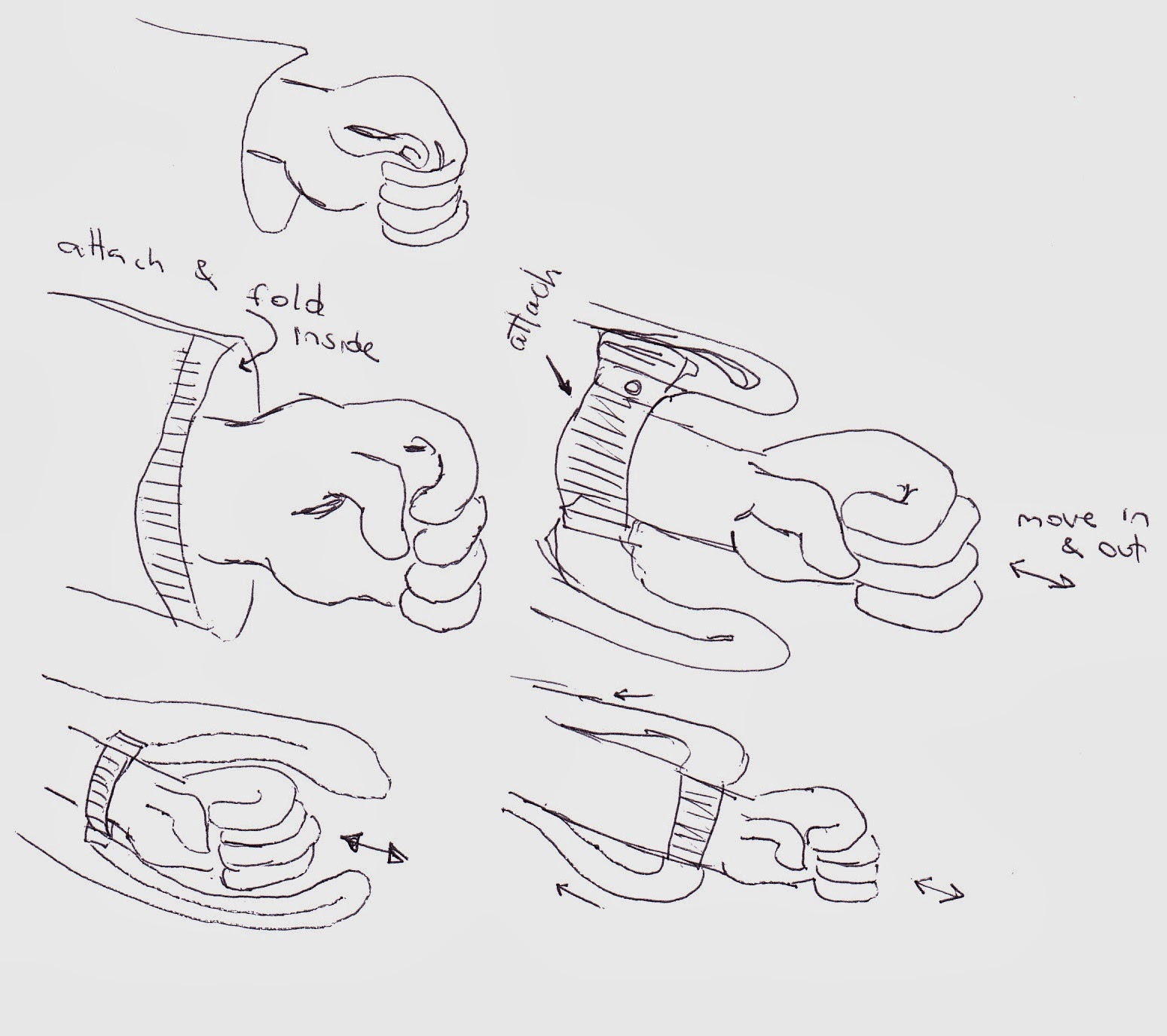 When I was a teen, I thought that the shaft of uncircumcised boys was something like a fixed length tube (think of the barrel of a gun), and the glans was somehow  inside and it would "pop out" during arousal. In reality, this barrel analogy would describe better the inner corpora, but having the glans already attached at the tip. The skin of the penis, including the foreskin, covers the harder inside part (corpora plus glans) and can be pulled back to expose the glans. Nothing "pops out", the skin just rolls back.

The restored foreskin is at least as sensible as the rest of the penis - which is to say, it's very sensible. To pleasure. To pain. To pleasure! Every part of the restored foreskin feels pleasure. There is really no difference in the skin area of the foreskin and the skin area of the shaft. Every part of the foreskin is alive, just like our fingers, our nipples, our lips, our ears are alive.

Those who describe the foreskin as just "a fold of skin" fail to understand how the skin even works. Rub the tip of two fingers softly in circular motion and perceive the tingling sensation. This is sensitive skin alive, sending signals to the brain. The same would be true of the foreskin, if it had not been removed by the person performing a circumcision. Imagine now if you were missing the nerves at the tip of those fingers, if this was just a numb area, or if that tip of the finger was no longer in place. Now you have an idea of the loss.

Even then, the foreskin is more than skin. Consider that the inner side is mucosa, consider that there is a layer of muscular tissue inside (dartos fascia). If it was simple delicate skin, it wouldn't resist the tension that we subject it to during restoration, or the use of weights. While I personally have used weight in a very limited way (about 1.5 pounds), some restoring men hang up to 10 pounds or more from their foreskins for a few minutes to give their foreskins a workout.

The muscular tissue inside the foreskin reacts to temperature. In cold mornings, when the penis is somewhat pulled inward, the foreskin contracts its opening and keeps everything inside like a nice jacket. For restoring men this means that in order to achieve what we call "full flaccid coverage", we need to have enough skin to fully cover the glans without reducing the length of the penis and leaving some overhang, so that the skin can contract at the "apparent tip" and keep the glans hugged inside. 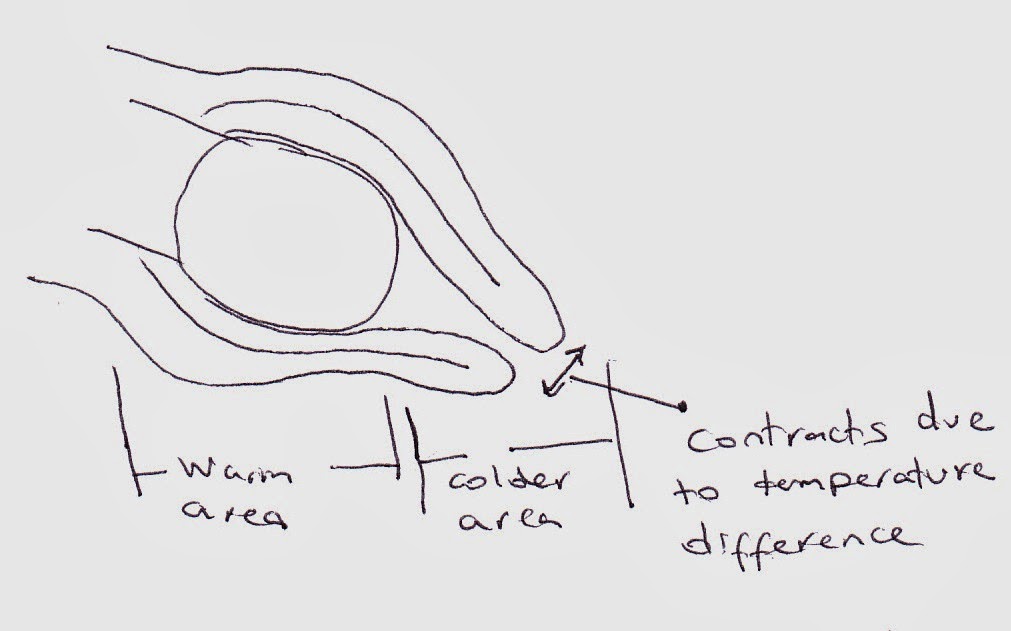 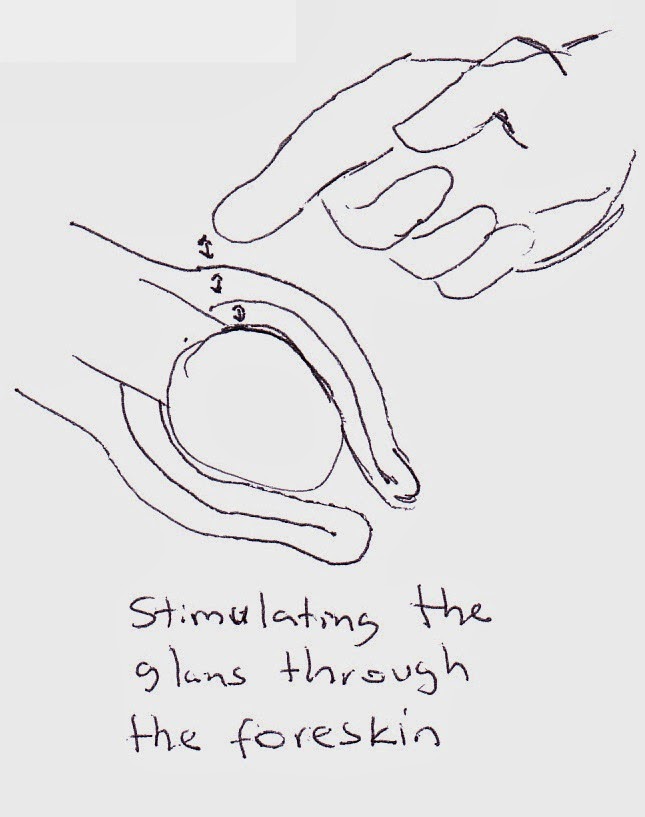